The GPO in Dublin By Irish Artist, Vincent McAllister

The GPO in Dublin – Venue of the 1916 proclamation

This artwork comes from historical images of the GPO in Dublin. It has been drawn entirely in coloured pencils in such a way that brings an atmospheric scene from this significant period in Ireland’s to life.

The GPO is the most noteworthy location associated with the Easter Rising. During the Easter Rising of 1916, it was the headquarters of the Irish Volunteers. It got taken over on Easter Monday of 1916 as a result of the Irish Volunteers and the Citizen Army. The first commander of the army was Padraig Pearse and another was James Connolly. It was on the steps of the GPO that Ireland’s citizens first herd the famous 1916 proclamation. This was delivered Pearse, Connolly and others as they proclaimed the Irish Republic.

The rebels held out for a week in the GPO before surrendering to the British forces. The main frontage of the building escaped serious damage while the interior was destroyed as a result of fire and persistent shelling. It therefore stands today as a lasting memory of the events of 1916.

Reconstruction began in 1925 due to  the new Irish Government and therefore leading to its reopening in 1929.

There are no reviews yet.

Be the first to review “The GPO in Dublin By Irish Artist, Vincent McAllister” Cancel reply 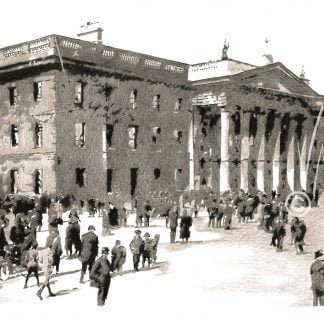 You're viewing: The GPO in Dublin By Irish Artist, Vincent McAllister £30.00
Add to basket